An interesting read and a heads up to designers, ship operators/owners and Engineering crew onboard ship. 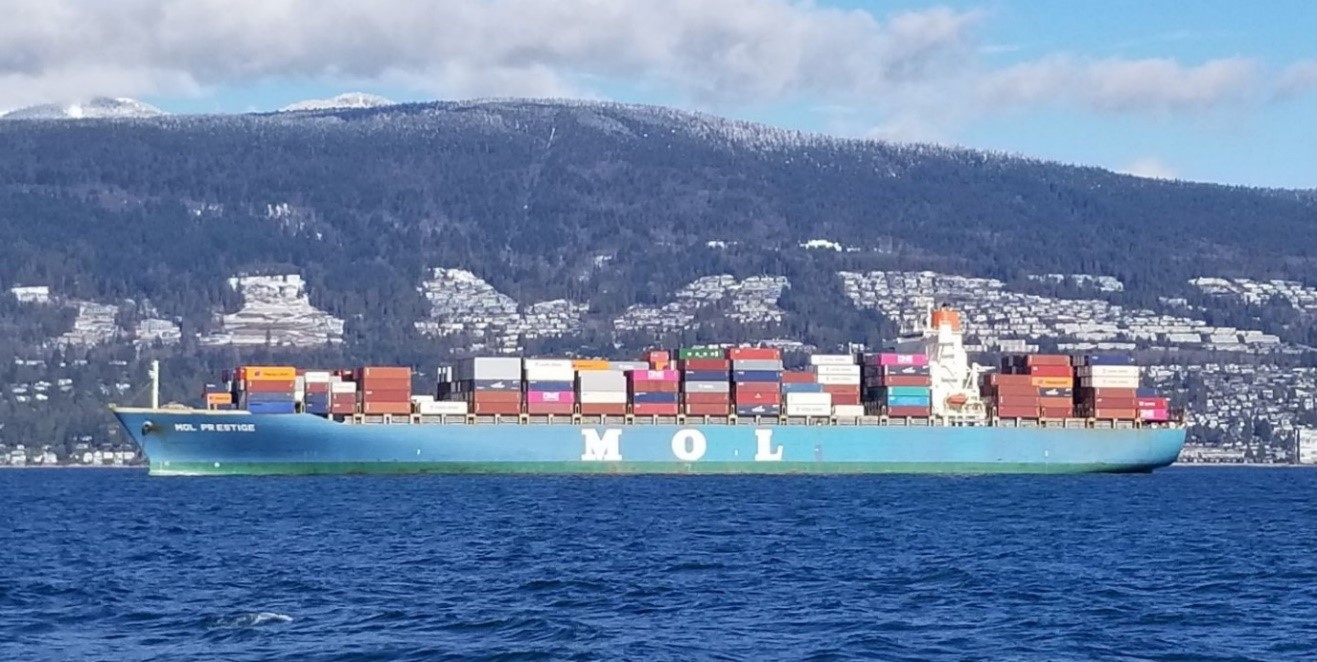 On 31 January 2018, a fire broke out in the engine room of the container vessel MOL Prestige while the vessel was at sea 146 nautical miles south-southwest of Haida Gwaii, British Columbia (BC). There were 22 crew and 1 supernumerary on board at the time. The fire was eventually extinguished. Five of the crew members were seriously injured. A Royal Canadian Air Force helicopter evacuated 2 of the crew members to hospital in the Village of Queen Charlotte, BC. The Canadian Coast Guard ship Sir Wilfrid Laurier assisted until a salvage tug arrived and towed the disabled vessel to Seattle, Washington, United States.

The investigation identified a number of safety deficiencies described below.

If those responsible for ensuring an engine room is maintained sufficiently do not work together to mitigate hazards (leaks, broken equipment, adaptations) in a timely and efficient manner, there is a risk that engine room equipment will fail, leading to accidents. 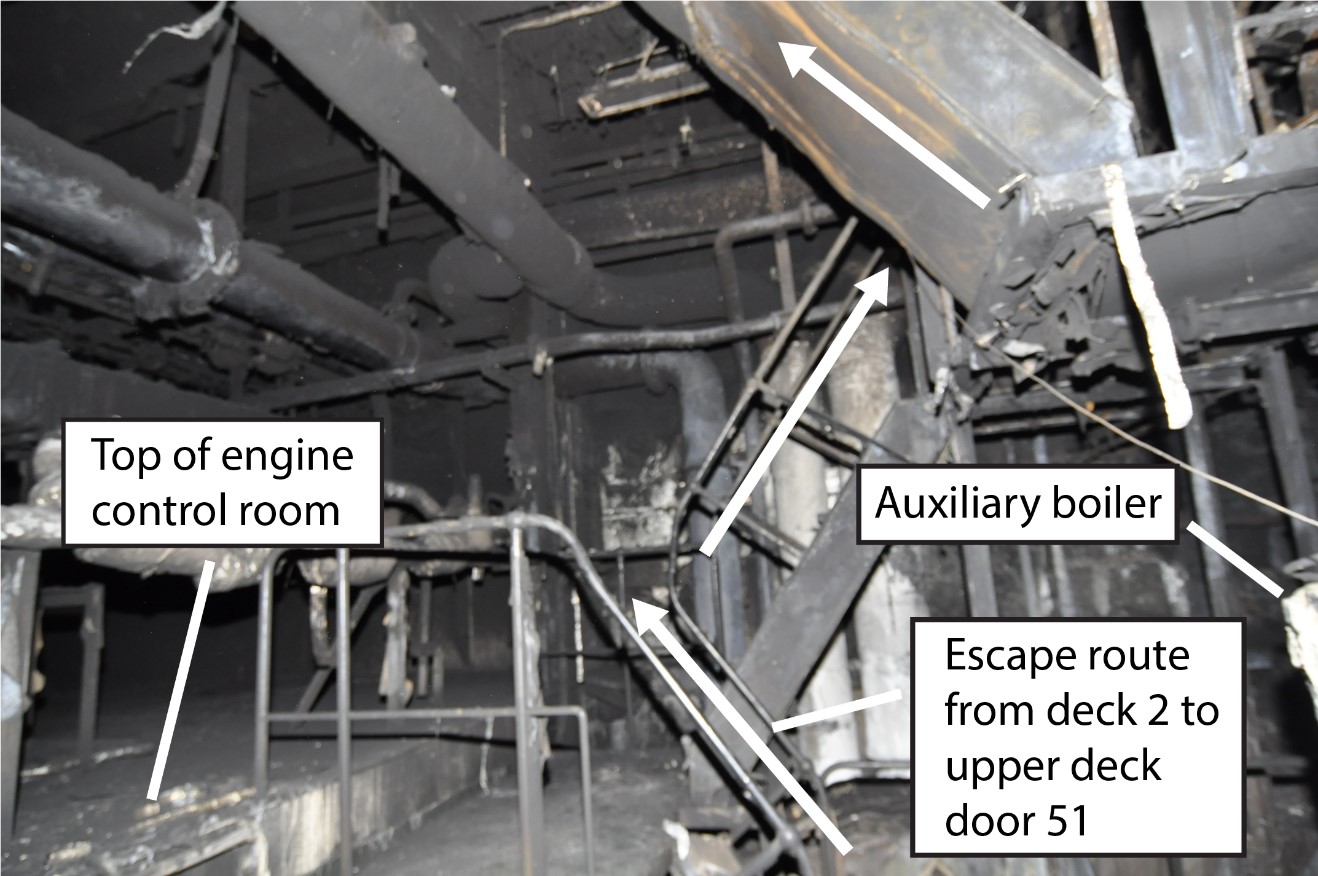 Egress and evacuation from engine room

Timely egress and evacuation from an engine room is essential in the event of an engine room fire. In this occurrence, the engine room personnel met in the engine control room as the fire began developing, but then became trapped once the fire escalated. A number of factors combined to make egress from the engine control room and subsequent evacuation efforts challenging, placing crew members at risk during the emergency response and prolonging the time that elapsed before egress was possible.  During this delay the fire continued to burn unabated.

Cargo vessels constructed after 01 January 2016 must meet regulations set out by The International Convention of Safety of Life at Sea (SOLAS) with respect to escape arrangements from engine control rooms. Although not required for cargo vessels such as the MOL Prestige, which was constructed prior to 01 January 2016, an evacuation analysis of the engine room may have prompted an evaluation of the necessary means of escape from the engine control room, including the placement of the emergency escape breathing devices, the markings required, and the visibility of the exit doors.

If the owners/operators of cargo vessels constructed before 01 January 2016 do not evaluate evacuation routes to ensure that escape arrangements from engine control rooms provide an equivalent level of safety to that required by the current SOLAS regulations, there is a risk that the means of escape provided will be insufficient to support safe and timely egress to a safe position outside machinery spaces.

To respond effectively to a fire, crew must be trained in emergency procedures and must practise using emergency equipment. Drills that are realistic and include varying scenarios help to increase a crew’s preparedness and effectiveness in responding to a fire. The crew on the MOL Prestige had regularly practised drills related to fire in the engine room and rescue from enclosed space, but not all crew members had had the opportunity to practise donning firefighting equipment, and the drills involving fire had not been conducted with realistic scenarios involving unexpected events. The investigation found that the crew had not had the opportunity to practice all of their designated duties and related procedures during drills.

If emergency drills are not routinely practised and evaluated with all of the crew members’ designated duties, or do not include realistic scenarios, there is a risk that the crew will be unprepared in an emergency.

The MOL Prestige was fitted with a fixed fire suppression system, but it had leaks in safety-critical units and hoses that went undetected until the system was inspected after the fire. The regulations specify that the system must be able to withstand a minimum bursting pressure and be subjected to an initial pressure test at the time of construction. There is also a requirement to hydraulically test all CO2 cylinders at regular intervals. However, this principle is not extended to include the distribution system, and there is no requirement for a pressure test to be carried out periodically during the life of the vessel. Inspection and testing regimes for CO2 systems must, therefore, contain provisions that will help ensure their continued integrity.

If critical on-board firefighting appliances, such as a fixed fire suppression system, are not maintained according to the manufacturer’s specifications and regulatory requirements, there is a risk that such systems will not function as intended in an emergency.

The MOL Prestige had an audited safety management system that included procedures for hazard identification, for checks to engine room equipment, and for record keeping, among other things, but some of the safety issues identified during the investigation were not identified during audits or routine checks. Furthermore, none of the methods for hazard identification provided for by the vessel’s SMS were successful in leading to the timely correction of these issues.

If companies do not establish an effective SMS that encourages crew to identify hazards and that supports the crew in developing safe and timely mitigations, there is a risk that hazardous operating conditions will remain.

END_OF_DOCUMENT_TOKEN_TO_BE_REPLACED

William Froude  (November 28, 1810 in Devon [2] – May 4, 1879 in Simon's Town, South Africa) was an English engineer, hydrodynamicist and naval architect. He was the first to formulate reliable laws for the resistance that water offers to ships (such as the hull speed...

END_OF_DOCUMENT_TOKEN_TO_BE_REPLACED

"Sustainable shipping for a sustainable planet" is the World Maritime theme for 2020. This will provide an opportunity to raise awareness of the United Nations' Sustainable Development Goals (SDGs), and showcase the work that the International Maritime Organization...

END_OF_DOCUMENT_TOKEN_TO_BE_REPLACED

Disaster Management Act (57/2020): Measures to address, prevent and combat the spread of COVID-19 at Seaports

The NDoT has issued a new Government Gazette – Disaster Management Act (57/2020): Measures to address, prevent and combat the spread of COVID-19 at Seaports. 2020-08-20-gg43629-NDOT-Crew-changes On 25th June every year, Day of the Seafarer celebrates the vital...

END_OF_DOCUMENT_TOKEN_TO_BE_REPLACED

The National Ports Authority has submitted its tariff application to the Ports Regulator for the 2021/22 – 2023/24 tariff period.

END_OF_DOCUMENT_TOKEN_TO_BE_REPLACED

Why shipping needs to shout louder about the crewing crisis.

By : Richard Meade ANGRY chief executives, unprecedented unity between the usual in-fighting and sniping, regular missives from every secretary-general, president and head honcho you care to mention, a front page on the Financial Times and support from the Economist,...

END_OF_DOCUMENT_TOKEN_TO_BE_REPLACED
« Older Entries
On 25th June every year, Day of the Seafarer celebrates the vital yet often hidden work done by seafarers to transport goods and commodities all around the globe. The film illustrates the unseen connections between those who serve at sea and the things we take for granted in our everyday lives.